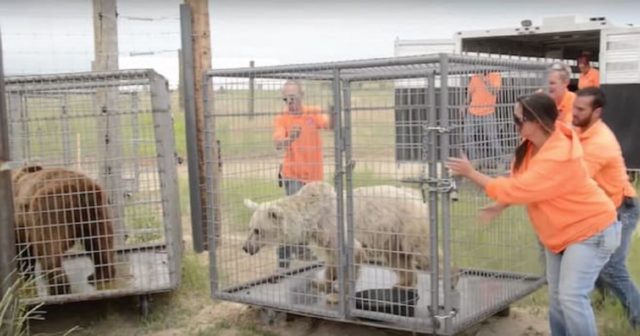 It is heartbreaking to see that many wild animals are kept in cages and forced to live in poor conditions. Animals were all born to live in their habitats, not behind bars and fences like prisoners. We need to understand that they have done nothing wrong to deserve such treatment.

It is the story of four bears, Bruno, Fifi, Marsha and Pocahontas, who have been locked up in small cages at a derelict zoo in Pennsylvania, USA for 20 years. Thankfully, the Colorado Wildlife Sanctuary and Peta took action to save the poor bears. The bears were neglected and in poor condition, but were eventually released and moved to a new habitat.

The bears became very frustrated with being trapped in cages for a long time, so it took some time for the bears to get acquainted with the new life. However, with the proper care of the staff at the shelter, the bears finally realized that they were free and began to explore their new environment.

We are glad to know that many people are doing their best to save the animals from captivity. That’s why we want to provide our readers with a great video today. This video shows the bears taking the first step out of their cages and it is an amazing moment to watch.

The image below shows the bears taking their first steps outside of their cages. It’s an amazing moment to see.