The standard-wing bird of paradise (Semioptera wallacii), also known as Wallace’s standard-wing, wears a brilliant crown of violet and lilac, and its suit is finished with a bright emerald green vest. Its impressive appearance makes it one of the most beautiful birds in the animal kingdom.

Males are up to 11 inches long, and apart from the crown and west, the most impressive features are the two pairs of long white feathers emerging from the wing bend. The bird can raise or lower them at will.

In addition to being smaller, females have different colors, appearing almost plainer than bright males. They are almost entirely brown and have longer tails than males. The beak and feet are the same color as the male.

The Standard-wing Bird of Paradise is endemic and restricted to three islands in northern Maluku, eastern Indonesia, the westernmost species of the true Bird of Paradise.

On their island home, they prefer lowland tropical rainforests in mountainous areas. However, they can sometimes be found in isolated forests.

These birds are primarily frugivorous and eat a variety of fruits such as figs and drupes. But if the opportunity presents itself, they won’t pass up the worm.

Males are polygamous, mating to perform a spectacular aerial display. He is “parachuting” with wings and his vivid green chest shield is spread out, and wing “standards” flutter above his back in an attempt to impress females.

Unfortunately, more detailed information about the rest of the breeding process is not yet available.

Its impressive looks make it one of the prettiest birds in the animal kingdom.

wearing a stunningly slick crown of violet-and-lilac, and its suit is finished off with a bright emerald green vest

The males are up to 11 inches long

Though it has a very limited habitat range, the standard wing bird-of-paradise is quite common throughout it. It is labeled as the least concern on the IUCN Red List of Threatened Species due to its progressively fragmented habitat.

The standard wing bird-of-paradise can be found on three islands in Northern Maluku, eastern Indonesia.

The aerial display was filmed by famous author Ser David Attenborough for the BBC Natural World film “Attenborough in Paradise.” He later speculated that the reason for their extravagant behavior is to establish the hierarchy for breeding rights, rather than to directly impress the females

These birds are mainly frugivorous but will eat an insect occasionally.

It is named after Alfred Russell Wallace, who conducted important biological studies on the islands of the Malay Archipelago.

They led him to develop the same concepts of natural selection and speciation that Darwin was developing. Wallace was the first to register this bird.

Males are polygamous, and they gather when performing mating aerial displays.

These birds are rarely seen as they keep to themselves up high in the tree canopies. Even though their population size has not been quantified, and there is much to be learned yet about the breeding process and their care of the young ones, we know that their life span is five to eight years and that they are not endangered.

Read Also: This Couple Faces A Severe Backlash From Their Neighbors After Erecting A Giant Cat Enclosure 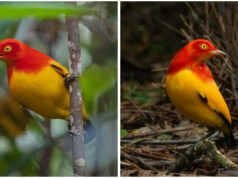 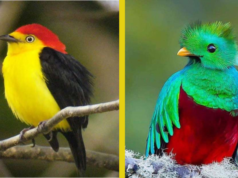 10 Most Beautiful Birds in the World You Must See 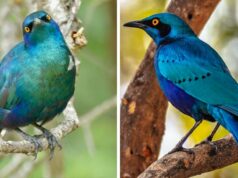